The benefits of vocational education for low-achieving school leavers

Every year, about 65,000 school leavers start low-level vocational courses. As underlined in a report by the House of Lords Select Committee on Social Mobility, these young people have received much less attention than those who go on to A-Levels and university and, at the other end of the spectrum, the small minority dropping out of education, employment or training. Although this is a sizeable group (10% of a cohort), their participation in vocational education and labour market outcomes have so far been barely documented.

In a new paper[1], we analyse in detail the school-to-work transition of young people who left school in the summer of 2011 and started low-level vocational courses, known in England as ‘Below Level 2’ (BL2). Using newly available linked administrative data, we examine the characteristics of BL2 learners, their learning trajectory, and their labour market outcomes.

Young people who start BL2 courses after leaving secondary school are amongst those who have faced the greatest challenges in secondary school. They have extremely weak GCSE results. Nearly all of them failed to achieve five A*-C GCSEs, the typical requirement to start A-Levels. 68.5% of them did not achieve a single A*-C GCSE, a proportion higher than amongst those who left education and got a job (48.6%) or became ‘Not in Employment, Education or Training’ (NEET, 60.7%). BL2 learners were already struggling at school prior to GCSEs. Over half of them performed below the expected level in English and maths at Key Stage 3 (ie national examinations taken at 14 years old). In addition, 39 per cent of them report having disabilities, learning difficulties or other health problems.

BL2 courses have similar characteristics: most programmes require the completion of 300 to 400 Guided Learning Hours (GLH), of which 200 to 300 GLH are devoted to the main subject. The main subject for about a third of all young people is Preparation for Life and Work, which focuses on personal and social skills for the purpose of personal growth and further engagement in learning. Amongst the subject areas with a clear vocational focus, the most popular are Construction (23.8%), Engineering (15.5%) and Retail (12.3%).

We find significant progression in education by the BL2 learners. Nearly 80% of BL2 learners made successful transitions leading into continued employment, higher-level college-based vocational education, or apprenticeships. Three years after leaving secondary school, over half of the BL2 learners achieved a qualification at, or above, Level 2.

However, one in five BL2 learners drop out of education and become and remain NEET. Our analysis suggests that females are at higher risk of becoming NEET than males. Those coming from more disadvantaged areas (as measured by the Index of Multiple Deprivation) are more likely to become NEET compared to those from more privileged backgrounds. Achieving the initial BL2 course is associated with lower risks of becoming NEET. 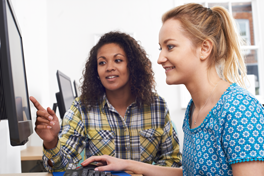 Looking at labour market outcomes in the 2015 tax year, we find that 59.6 per cent of BL2 learners were doing some paid work, and those who did some paid work earned on average £6,724. Employment rates and earnings are higher for learners who studied Engineering, Construction or Retail compared to Health, Public Service and Care, and Preparation for Life and Work.

Our results also suggest that BL2 learners who achieved their initial vocational learning aim, fare better in the labour market than those who did not. After controlling for demographic characteristics, past performance and behaviour at school, as well as college characteristics, achieving the initial BL2 course is associated with a 4.6 percentage point increase in the probability of carrying out some paid work in the 2015 tax year, and with 16.7 per cent higher earnings. Earnings differentials associated with achievement were significantly different across subject areas. Achieving a BL2 course in Health, Public Service and Care, Retail or Engineering are associated with substantially higher earnings compared to achieving a BL2 course in Preparation for Life and Work, the most popular subject area.

The main limitation of our study is that the association between achievement and improved labour market prospects cannot be interpreted as necessarily reflecting a causal effect. While we control for a number of individual and college characteristics, there may be other factors that drive both achievement and labour market outcomes. For instance, less motivated learners may be more at risk of dropping out and become NEET. Conversely, some learners may choose to move on to paid employment or higher level learning, before formally obtaining the qualification.

In our view, the evidence suggests policies should try to encourage and support adolescents’ engagement until they successfully gain their (low level) qualification. Evidence on interventions amongst adolescents shows that the acquisition of basic skills in numeracy and literacy are greatly valued by employers. But targeting such cognitive skills in isolation is not sufficient for long-term impacts on successful labour market performances. Non-cognitive skills such conscientiousness, self-discipline, perseverance, cooperation, and willingness to be managed by more senior/adult employees are nearly equally essential ingredients to success on the labour market. The role of training mentors in this process can mimic parents’ involvement and appears most effective in firms-based environments away from formal schooling.[2]