Please note, this online version of this article supersedes the printed version, due to an error printed on p7, where a graph was ommitted.

Pay for apprentices in the first year of their apprenticeship, or generally for apprentices under the age of 19, had been exempt from the UK’s National Minimum Wage (NMW) regulation when this was first introduced in 1999. This exemption remained in place when a NMW was introduced for 16-17 year olds in 2004. While some recommendations for minimum weekly earnings levels for apprentices existed in England, a single hourly rate regulated within the NMW framework was only introduced on 1 October 2010. The introduction of this rate marked an important regulatory change on apprentice pay as it specified what counts as minimum wage and provided clear guidance on the treatment of benefits-in-kind and of hours of work which must be paid. In addition, the NMW compliance and enforcement regime was extended to cover apprentices.

IES was commissioned by the Low Pay Commission to estimate the impact of the introduction of the apprentice rate on wage levels with descriptive methods and by carrying out an econometric impact assessment[1]. We used large-scale data from two apprentice pay surveys of the time before and after the introduction of the apprentice rate, provided by the Department for Business, Innovation and Skills, and further individual-level data from the Labour Force Survey.

Our descriptive analysis compares the distribution of hourly gross wages of apprentices in 2007 and 2011 using histograms (Figure 1), which show the size of groups reported in the surveys, with hourly wages in intervals between a minimum of £0-£1 and a maximum of £29 and over. In addition, we show kernel density estimates of the wage distribution as a blue curve. Compared to the discrete nature of the histogram, the aggregated kernel density estimates smooth out the contribution of each observed wage relative to other data points[2] and converge faster to the true density for continuous variables such as wages.

The results show some interesting changes in the wage distribution: while median hourly wages of apprentices in England increased from £4.18 (2007) to £5.87 (2011), the distribution has become increasingly bimodal and shows that relatively more people were earning the wages close to the apprentice rate of the NMW of £2.50. However, the longer right side tail also points to many apprentices earning higher wages, particularly in 2011. The distribution widened between 2007 and 2011 and skewness increased, which suggests that there was considerable growth of high earnings until 2011. 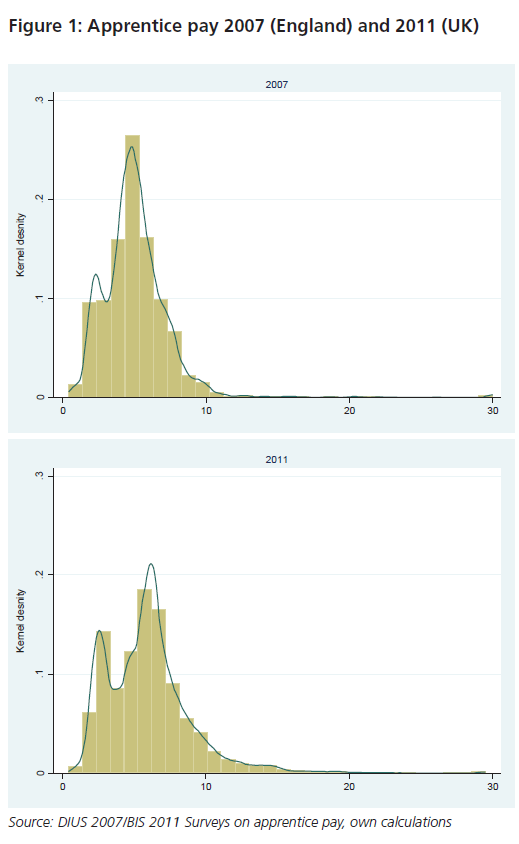 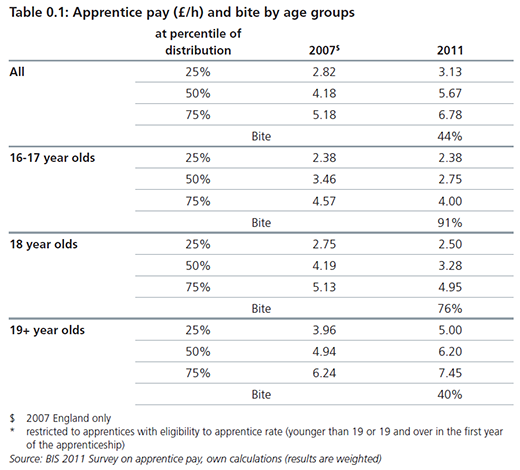 This is confirmed when describing the distribution by age groups:

Our findings show that mature apprentices (aged 25+) were not affected by the introduction of the apprentice rate. By contrast, we found a negative impact of introducing the rate on wages of young apprentices. This finding is surprising because the introduction of a minimum wage should unambiguously increase average wages as those below the level would have to be lifted. However, it is not impossible in a situation of generally decreasing apprentice wages: introducing the minimum wage could have prevented apprenticeship wages from decreasing even further. Nonetheless, an estimated impact could be negative without controlling for such specific trends in apprentice wages, which was not possible because data was only available for 2007 and 2011.

In our view, our research points towards the great methodological difficulty of estimating the average impact of introducing the minimum wage with available data and evaluation methods because apprenticeships are expanding and transforming at the same time. Although our econometric models capture sector effects with dummy variables, they cannot fully control for compositional changes in apprenticeships, in particular the growth of apprentices in non-traditional sectors such as retail, heath and childcare, which had further impacts on average wages in addition to the introduction of the rate. Therefore, we estimated further impacts at sector level. These show insignificant impacts of the introduction of the rate for most sectors, but also a positive impact increasing the wages of hairdressing apprentices younger than 25. This is some evidence that the introduction of the rate increased apprentice wages where they are traditionally very low, which should be further investigated.

[1] Speckesser S and Behling F (2013). An impact analysis of the introduction of the Apprentice Rate of the National Minimum Wage: A research paper to the Low Pay Commission for the preparation of its 2013 report. Online link (August 2013): http://www.lowpay.gov.uk/lowpay/research/pdf/Final_Report_IES_ref_00101_2890.pdf

[2] This depends on the distance between point x(i) and x subject to a kernel function (we assume a normal kernel on each of the data points) and a bandwidth parameter. The estimated density at any point x is

with kernel function K and bandwidth h. Estimated f(x) integrate to one and depend both on bandwidth and shape of the kernel function. While the latter is less, the choice of the bandwidth clearly matters as a too low bandwidth would result in very spiky kernel densities.