Standard microeconomic theory sets out a very clear link between wages and productivity. In economic policy, this theoretical link is extensively used as a criterion to assess the implications of wage settlements for employment outcomes at national level. If the growth of wages (or more accurately, of total labour compensation) in a country exceeds the growth of productivity, firms will reduce output levels and employment in order to survive. As a result, keeping wage growth at or below the rate of productivity growth is seen as important in order to maintain or increase output and employment levels.

These theoretical arguments are commonly used to justify policy reform following the recent sharp increases in unemployment across Europe. In particular, it is often argued that:

Proponents of this view go on to push for public policy at national and at EU level to help achieve such 'wage moderation', through institutional reforms affecting the national wage bargaining systems.

The loss of competitiveness before the recession

Below, we compare recent trends in labour compensation per employee (including nonwage labour costs) and productivity (gross value added per hour)[1] for the EU-27 Member States and other developed economies. Figure 1 shows that, on these measures, the competitive position deteriorated in many EU Member States in the run-up to the recession. This was true, in particular, for Greece (10% growth in labour compensation compared to 3% productivity growth). Also, however, productivity grew substantially more slowly than did labour compensation in Italy, Denmark, Sweden and Spain (and slightly more slowly in Ireland, Finland and the Netherlands). The actual impact of excessive wage growth on competitiveness will vary according to the degree of international competition in individual sectors, and in the case of non-eurozone countries (e.g. Sweden and Denmark) may be mitigated by exchange rate movements. 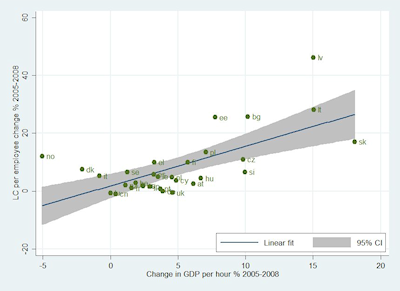 As shown in Figure 2, labour compensation growth was generally much slower in the recession of 2008-10 as unemployment increased. Indeed labour compensation fell in real terms in Estonia, Greece, Hungary and Sweden, and grew more slowly than productivity in most EU member states for which data are available. However, there are significant differences between countries:

We interpret these changes as early signs that competitiveness is being restored and the economic and employment situation in some EU member states being improved, particularly in economies of the eurozone which enjoy 'flexible' bargaining mechanisms (Ireland and Estonia). This should improve or restore international competitiveness and result in more output and employment in these countries relative to others. 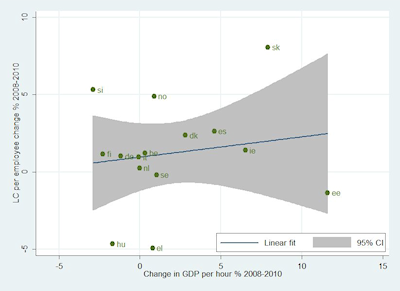 N.B. Countries without OECD data for 2010 have been excluded from the analysis Source: Conference Board Total Economy Database, OECD Stat. Extracts, own calculations *CI: Confidence Intervals

Does wage moderation lead to higher employment levels in the longer term?

While the recent data presented above provide some support for the arguments for wage restraint as one of the policy levers contributing to recovery and growth after the crisis, the picture which emerges from the longer-term evidence is much less clear. Thus, for example, taking a broader sample of OECD countries, the long-term data (1995-2009, Figure 3) shows labour compensation per employee growing more slowly than productivity in Japan, New Zealand, Australia, and particularly Germany. In contrast, in the US, the growth rate of labour compensation per employee was much closer to the productivity growth rate than in these countries (i.e. there was less wage moderation in the US). Nonetheless, productivity and employment grew faster in the US than in countries with higher levels of wage moderation. 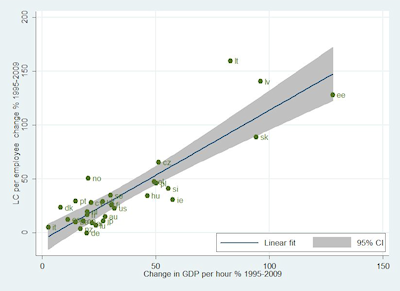 A fuller empirical analysis, and more detailed arguments are presented in the longer paper on which this article is based[2]. Overall, these confirm that wage moderation may well increase employment in the medium and long run, although any relationship appears to be fairly weak, and there are numerous exceptions at country level, and over different time periods.

It is however, important not to attribute too much weight to the rather unusual experience of the short-term economic crisis of the last few years. Indeed, the broader evidence sows the seeds of doubt about the extent to which sustained wage moderation (as observed in Germany) is really a successful mechanism for increasing output and employment in the long run. Again, empirical data show that wages were more clearly aligned to productivity in countries such as the US or the UK (i.e. there was less wage moderation through holding wage growth below productivity growth). Yet, over the longer term, in recent decades these countries report much better employment performance and higher productivity growth than Germany, where wage growth was held below productivity growth for a substantial period. It needs also to be remembered that, even in economic theory (albeit more sophisticated theory than the simple models cited by many policy commentators), innovation itself is endogenous, and a 'low wage route' may reduce innovation activity, resulting in lower productivity growth in the long run.

[1] Both measures at constant prices and adjusted for purchasing power parity.
[2] Meager N and Speckesser S (2011), Wages, productivity and employment: A review of theory and international data