In the European Union, around two-thirds of workers are covered by some form of collective agreement, pointing towards the importance of wage bargaining for macroeconomic outcomes in the 'European Social Model'. IES recently undertook research for the European Foundation for the Improvement of Living and Working Conditions to better understand the effects of the different characteristics of (national) wage bargaining regimes on pay outcomes. Our study delivers new empirical evidence on the impact of bargaining institutions on macroeconomic outcomes, incorporating key features of national wage negotiation systems such as centralisation and coordination.

The role of wage bargaining changed significantly after the introduction of the Euro in 1999: with no monetary policy mechanisms in individual EU Member States in place, bargained wages now affect the competitiveness of the sectors exposed to direct competition on the intra-European markets. In order to mitigate existing, and avoid the emergence of further, macroeconomic imbalances, the long-established national bargaining regimes (mainly sectoral or inter-sectoral wage bargaining) need to achieve pay outcomes that retain high employment levels and economic growth in the context of increased competition.

Therefore, European recommendations have emphasised that nominal wage increases should be consistent with price stability and that real wages (ie taking into account prices) should increase in line with labour productivity growth. It is also recognised that collective bargaining should take into account the heterogeneity of labour (skills, qualification or geographical area) and that there should be an aim to reduce the gender pay gap. However, wage bargaining and pay policy in the wider sense are explicitly excluded from regulation under the EU Treaty on the Functioning of the European Union (TFEU), despite the crucial role of wage bargaining for macroeconomic stability in the EU Member States and even more in the Eurozone.

Institutional variety in the EU

National wage-bargaining institutions differ markedly across European countries, along a number of dimensions. Further, the level of centralisation of wage bargaining varies substantially across countries. In Austria, Denmark, Germany, Italy, the Netherlands, Portugal and Sweden, wage bargaining predominantly takes place at the sector or industry level while in in the UK since the early 1990s, and most Eastern European countries, wage bargaining takes place at the local or company level. There is also a wide variation in the level of government intervention in the wage-bargaining process, and of coordination between the industry sector and companies. Wage setting is highly coordinated in Austria, Belgium, Denmark, Germany, Spain and Sweden. Coordination can also be relatively high in spite of not being achieved through formal channels, such as in Italy since 2000, where bargaining is characterised by informal centralisation of industry and firm-level bargaining. In Latvia, Lithuania and the UK, wage bargaining is confined largely to individual firms or plants. 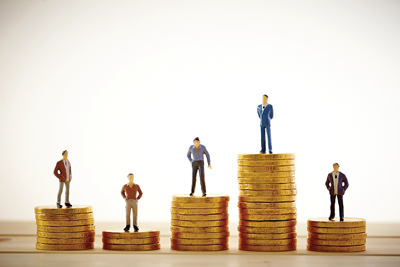 In our study, we combined country-level information on collectively-agreed gross wages and other pay outcomes with macroeconomic data from the annual macro-economic database (AMECO) and characteristics of the wage-bargaining regime from the Database on Institutional Characteristics of Trade Unions, Wage Settings, State Interventions and Social Pacts (ICTWSS 4.0). We then assessed the impact of the wage-bargaining institutions [1] on various pay outcomes such as collectively-agreed wages, unit labour costs, labour compensation per employee/per hour, and wage drift (differential growth of wages and labour compensation) using a variety of Fixed Effect and Dynamic Panel Data models.

The results indicate that the key institutional variables of the wage-bargaining regime pay outcomes are: the mode, ie how coordination is achieved, as initially discussed by Traxler (2003), and level of wage bargaining. We found that:

The first two key findings show that uncoordinated bargaining at company level, which does not follow an objective of achieving high levels of employment in the economy, results in higher pay outcomes on average in the economy. At macroeconomic level, this would correspond to a superior bargaining outcome if employment levels remained constant and macroeconomic imbalances from increased wages could be avoided. Such a situation could indeed exist if firms achieve high levels of profitability, so that there is scope to increase wages without inducing negative employment effects. Introducing some elements of firm-level bargaining could then complement coordinated/higher-level bargaining and result in increasing pay outcomes in very profitable firms without creating a great risk to an overall objective of wage moderation aiming to increase aggregate employment.

The third key finding is that productivity growth exceeds the growth of compensation costs in countries with regimes characterised by higher degrees of coordination and levels of centralisation to a greater extent than in countries with uncoordinated bargaining and company/local level bargaining.

If wage moderation were seen as a strategy to increase employment in the medium and long term, by mitigating imbalances and improving macroeconomic stability under Economic and Monetary Union (EMU), then the evidence from this study suggests that such a strategy would require a wage-bargaining system with a high degree of coordination. In the light of the great variety of traditions and institutions of wage bargaining and further institutions contributing to macroeconomic stability in the EU Member States, achieving highly coordinated bargaining across the EU would inevitably result in institutional change in many countries.