Getting people fit for work

In the Spring of 2010, eleven Fit for Work Service (FFWS) pilots were launched throughout Great Britain. They were set up following Dame Carol Black’s 2008 review[1] of the health of Britain’s working age population, to offer support for people in the early stages of sickness absence, particularly for employees working in small and medium-sized enterprises (SMEs). From April 2011, seven of the pilots were funded for up to a further two years.

IES, in partnership with the Fit for Work Research Group at Liverpool University, the Social Policy Research Unit (SPRU) at the University of York, the National Institute of Economic and Social Research (NIESR), and GfK NOP, were commissioned by the Department for Work and Pensions (DWP) to evaluate the pilots.

The report on the first year of the evaluation has just been published and is based on management information, interviews with stakeholders, providers of the programme's services, clients and GPs and a client survey[2] Further evaluation reports will be published, including the results of an impact study, using anonymised data from fit notes and other methods, in 2013.

By the end of March 2011, 6,726 people had taken up the service offered by the pilots, which was about 40 per cent of the number that the pilots expected when they formed their original plans. The original expectations may therefore have been over-optimistic and pilots found it difficult to engage with GPs and employers on a large scale.

Nearly all FFWS clients were employed and two-thirds were 'presentees' (individuals with ill-health who continue to work but who are at risk of sickness absence and loss of employment) rather than absentees, who were the original policy focus. Most clients had either a mental health condition or a musculoskeletal disorder and many had both: for example many of those with a musculoskeletal disorder, such as a bad back, also had a common mental health condition such as stress, depression or anxiety. In addition, ill-health conditions could be made more complex by non-health issues which deterred employees from staying in or returning to work. Over half of FFWS clients had work-related concerns, such as lack of support at work, harassment and bullying, and a fear that they could not cope with work demands. Clients also reported non-work problems such as poor housing, difficult domestic relationships or financial difficulties, which affected their ability to do their job.

The combination of all these factors tended to determine the level of complexity of an individual case and affect the speed at which sickness absentees returned to work.

In the first year of the programme, the most common way of accessing the FFWS was by self-referral or GP referral. Most pilots spent considerable efforts trying to secure referrals from GPs but found it much more difficult than expected to gain access to and then secure interest from GPs. Over the first year, pilots became more effective at engaging with GPs, by adopting a systematic approach, by being persistent and establishing their credibility by showing the value of the service they offered.

Some pilots specifically aimed to engage with employers, particularly at the outset, using a range of awareness-raising and marketing activities. As with GPs, direct approaches, including telemarketing and targeting specific employers, appeared to work best, but most had difficulties in securing interest from smaller employers. In addition, almost one in three FFWS clients had contacted the service directly. However, this appears to be largely as a result of marketing to or through employers and health professionals rather than general public marketing approaches which did little to generate referrals.

The client's journey through the Fit for Work Service is depicted in Figure 1.

Figure 1: Simple model of a Fit for Work Service 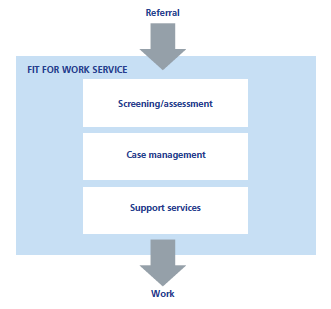 An individual's first contact with the service generally involved a telephone screening process to determine their eligibility and a brief discussion of their circumstances and what was limiting their fitness for, or well-being at, work.

If eligible, clients were then assigned a case manager who conducted a wide-ranging biopsychosocial assessment of the client's health and non-health-related conditions and circumstances. In four, generally larger, pilots this was carried out on the telephone and in the others it was carried out face-to-face. The outcome of the initial assessment was generally a 'return-to-work plan', identifying the issues facing the client, setting goals and identifying the support that the service would provide or access. As with the assessment, clients expressed a high level of satisfaction with their action plan.

Case management was a key element of the FFWS. In addition to assessment and goal setting, case managers supported their clients to meet their goals by:

As part of the role, case managers worked with clients to boost their motivation and confidence and provide general advice and guidance about how to meet their goals. In nearly all pilots they offered support with the client's employment situation, helping them to resolve workplace problems or negotiate a return to work. A critical difference between the pilots appeared to be between those that could offer some form of direct clinical support through case managers and those where support was offered from the wider pilot partnership or beyond.

Where case managers could not support clients themselves, their role involved helping their clients to access additional support. All pilots offered access to clinical services if required and in addition had made connections with a range of other non-clinical service providers, from anger management classes to advice about welfare benefits, that could offer support to their clients if they needed it.

The evaluation found three broad models in operation in the first year of the pilots, based on the form and nature of the initial assessment, the support provided by case managers, and the extent and speed at which clients were referred to additional services:

Finally, discharge arrangements generally involved clients leaving the service either by mutual agreement when they had met their initial goals or when there was nothing more that the service could do for them.

Respondents to the FFWS client survey were generally positive about their overall experience of the service. The vast majority of respondents agreed that the service had been responsive to their needs, well co-ordinated with other health and employment services, personalised and provided relevant referrals or signposting.

Some 62 per cent of the clients who were supported by the pilots in the first year had been discharged by the end of March 2011 and the remainder were either still with the service or were not yet recorded as having left. Ten per cent of clients who were initially assessed subsequently failed to engage.

Most respondents to the client survey said that they would not have received the support they had, without the FFWS. Qualitative evidence from the clients indicates that the FFWS provided significant support to return to work. In some cases the return would not have happened at all, in others it was made quicker, easier or more sustained by the intervention of the FFWS. In addition, GPs who used the FFWS reported several benefits, including the saving of resources. The ongoing impact study will provide more conclusive evidence on the outcomes of the pilots.

Dame Carol Black and David Frost of the British Chamber of Commerce recently conducted a review of sickness absence and reported their findings to the DWP in November 2011. They identified a number of weaknesses in the current system and have recommended the introduction of an Independent Assessment Service to review absentees' capability of working after a period of four weeks' sickness absence and provide support to help them return to work. The review also made a number of other recommendations abut employers' sickness absence procedures. The DWP is due to respond to the report in the summer.