Growing entrepreneurship: is it good for the workers?

This week is Global Entrepreneurship Week (GEW). According to its website, GEW is 'the world’s largest campaign to promote entrepreneurship. Each year, it plays a critical role in encouraging the next generation of entrepreneurs to consider starting up their own business.'

Reflecting on what’s happening here in the UK, it seems we’re not doing too badly with business start-ups. As the graph below shows, UK self-employment has grown steadily to a record level of over 4.5 million (15% of the employed workforce), a unique performance among large developed economies. This has been celebrated by policy-makers as a resurgence of entrepreneurship, but there’s been much less consideration of what a world in which a growing proportion of people work for themselves would look like in labour market and social terms. 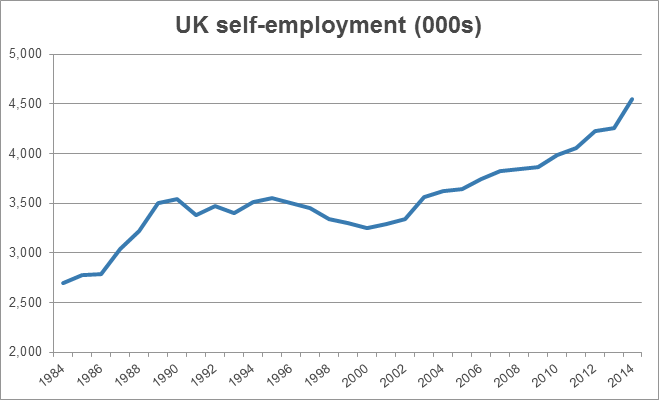 Additionally, research has shown that the earnings distribution of the self-employed is persistently more polarised than among employees: more of the self-employed have extremely high earnings, but more of them have very low earnings[2]. Controlling for other factors, being self-employed increases an individual’s chance of a very low income, despite the fact that they work longer average hours than employees, and self-employment leads to increased risk of poverty in old age (due to inadequate savings and pension entitlements).

These research findings didn’t sound that positive for the self-employed themselves, and were, at face value, at odds with survey findings which show persistently higher job satisfaction among the self-employed than among employees[3]. Part of the explanation for the paradox was that there might something different about those choosing to enter self-employment, who might be more likely to value independence and autonomy (even at the expense of poorer working conditions, lower incomes, insecurity and longer working hours).

More recently, more positive, nuanced evidence on the quality of self-employed jobs has emerged. Recent research[4] in which IES participated, uses longitudinal survey data from 1992-2012[5] on the quality of jobs: how hard people work, how much autonomy and discretion they have, how many hours they work, how insecure the work is, how much they can use and develop their skills, and many other indicators. This data set provides the first opportunity to compare objective measures of job quality between the self-employed and employees, and partly resolves the earlier paradox. Once we control for individual characteristics (the types of people becoming self-employed, and the types of jobs they do) we find that the self-employed record higher levels of intrinsic job quality than comparable employees on most indicators. For example, they report greater task discretion, more work variety, better matching between skills and tasks, and (in line with previous studies) higher levels of job satisfaction. The main negatives remain their longer working hours, harder work and lower training levels than employees, and they express some dissatisfaction with earnings levels and job security. Overall, however, the latest research does not suggest that self-employment is a ghetto of low-quality work, as might have been deduced from some previous studies.

So is everything in the entrepreneurship garden rosy? Not quite. Our research also shows a shift after 2006 (the period including the financial crisis and economic recession). Prior to 2006, the average job quality of self-employment was improving over time; after that point it has declined on most indicators (it’s still higher than for employees, but the gap between them is closing). Something appears to have happened to the quality of self-employment between 2006 and 2012.

In sum, it seems that the recent surge of self-employment is faster among women, in short-hours jobs, lower-level occupations and service sectors. And importantly we now have data showing a rapid fall in the incomes of the self-employed, and their real incomes have reduced even more than have those of employees since the recession[7]. Although most self-employed are still in the traditional occupations and sectors and still working long hours, it seems that the recession may have pushed a much wider group of people into self-employment, doing small bits and pieces of work, perhaps because they can’t find employee jobs, and this is consistent with the survey evidence of a fall in the job quality of the self-employed.

To conclude, the continuing growth of self-employment means that we must take it seriously as a significant and permanent part of the labour market, and while acknowledging its many positive aspects, we need a balanced picture which also recognises the possible downsides of a world in which more people spend more of their working lives in this form of work.  Important policy issues are highlighted by the low earnings, insecurity, and poor social protection (including poor levels of pensions) which many self-employed face. And in an economy in which rapid change puts a premium on skills acquisition and lifelong learning, the question of how the self-employed (who, the evidence suggests, have much lower levels of training in work than employees[8]) update their skills and human capital is a challenge which few policy-makers have even begun to address.

[1] Meager N and Bates P (2004), ‘Self-Employment in the United Kingdom during the 1980s and 1990s’, in Arum R and Müller W, The Reemergence of Self-Employment, Princeton, Princeton University Press

[4] Baumberg B and Meager N (2015), ‘Job Quality and the Self-employed: Is It Still Better to Work for Yourself?’, in Felstead A, Gallie D, Green F (eds) Unequal Britain at Work, Oxford University Press

[6] D’Arcy, C. and L. Gardiner (2014). Just the job – or a working compromise? The changing nature of self-employment in the UK. The Resolution Foundation