It is a truism to write these words, but in nearly twenty years of working in employment and social policy I’ve never lived through anything like the last month.  In the depths of the last recession, when I was at the Department for Work and Pensions, it felt like the labour market was changing around us – but it never changed as completely and abruptly as it has in these last five weeks.  There was a world before 16 March and a world after it.

So usually today I’d be writing about the latest Labour Market Statistics from the ONS.  But as with last month’s figures, published on 18 March, they describe the world that existed before.  What I said last month applies this month too – the jobs market was in great shape, but with over three million people out of work there was still more that we needed to do.

Instead then, today we’ve focused our comment and analysis on the one area where we do now have recent official data, namely the rise in Universal Credit claims.  And what we are seeing in that data is simply extraordinary.  Between the end of February and the end of March, just over 1 million households claimed for Universal Credit – a figure nearly five times higher than the monthly average over the previous year.  In all, 1.4 million households claimed in the four weeks between 16 March and 12 April.

Looking over the last forty years, where we have broadly comparable data (for unemployment benefits), there’s never been a month like this last one.  Before last month, the most new claims recorded in a single month was 570 thousand back in September 1984, and the biggest month-to-month increase was 78% between June and July 1994.  If there’s ever been a bigger increase in claims, for most of us it’s not in living memory (although it’s possible that there were larger spikes in the early 1970s or after the Second World War).

These figures show beyond any doubt the scale of the economic shock that we’ve experienced over the last month.  They also show the incredible strain that our social security system has been under: it has never in modern times had to deal with anything like this, and officials at DWP have done a phenomenal job in keeping the wheels on the road.

The good news is that today’s data suggests that the immediate demands for Universal Credit may be beginning to ease – with daily claims falling from an incredible 147 thousand on 27 March to an average of just over 40 thousand a day in the week ending 12 April.  However, this is still nearly four times higher than the daily average a month ago (11 thousand a day in week ending 15 March).  So the crisis may have eased, but it has not ended.

Daily Universal Credit declarations – by household and by individuals 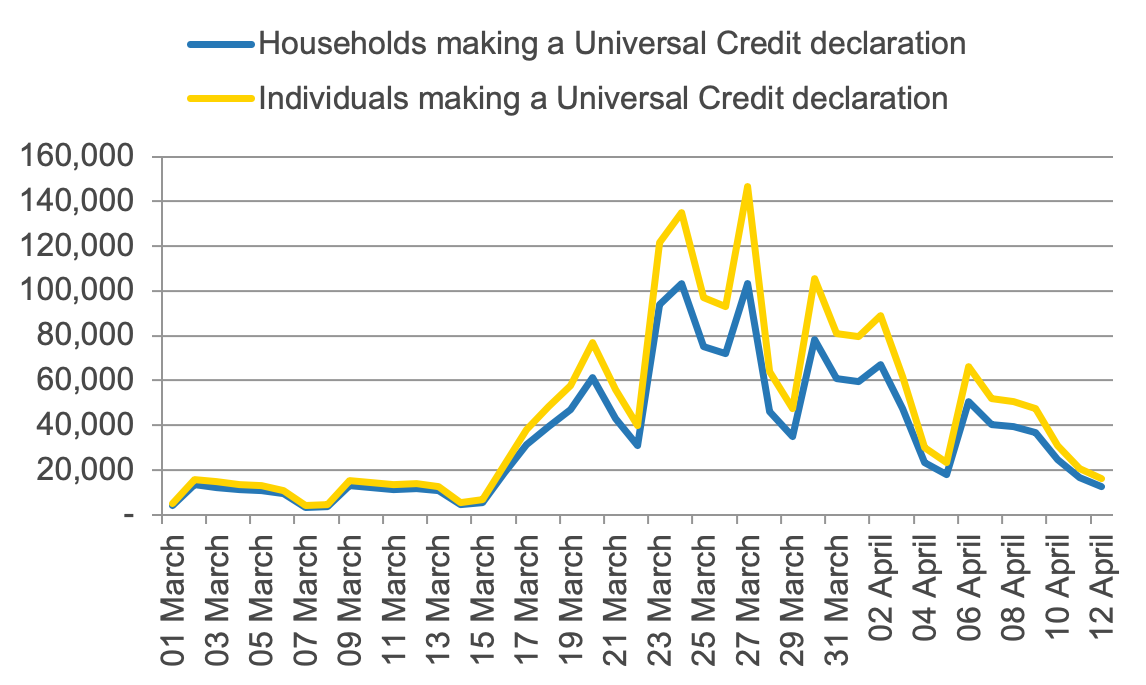 So, what conclusions should we draw from this data?

First, and most importantly, we need to make sure that these millions of households and families get their benefit paid quickly, correctly, and with support to manage their finances where they need it.  The data published today shows that the government has paid more than half a million advances in the last month – so at least a third of those claiming have received some money up front.  This is welcome.  In the coming weeks though, the first UC awards will be hitting bank accounts and in many cases may be lower than people expect.  The hard work of helping people who have lost jobs and incomes to manage over the next few months is only just beginning.

But alongside this, we also need to start work now on helping those out of work to prepare for and find new jobs.  This means mobilising local and national government, charities, recruiters, careers services and employment services, to help get the country back to work.  We set out detailed proposals to do this in our report earlier this month, with five immediate priorities:

1. A rapid and short-term expansion in jobs support now for the unemployed, alongside developing a new and specialist ‘Back to Work Service’ for the long-term unemployed (which will start rising by the end of this year).

2. To refocus skills and training support – including by expanding pre-employment, job-focused training; increasing investment in advice and guidance; and encouraging co-design and co-investment with employers and social partners.

3. Transforming support for young people, who are likely to be particularly hard-hit in this downturn. We want to see the development of a new, integrated Youth Employment and Skills Service working with local government; and in the shorter term the introduction of an education, employment and training guarantee.

4. An orderly withdrawal from the Job Retention Scheme over the next four to six months – aiming to maximise job retention but minimise risks of distorting the economic recovery.

5. Local Back to Work Partnerships to co-ordinate and implement the response, and a new Back to Work Charter with employers to promote jobs and good employment.

We need to start work on this now both to be ready for the recovery, but also to ensure that those out of work are staying close to work and have the help to look for work now where they need to.  And even now, there are jobs available: our analysis of real-time vacancies published yesterday, using data supplied by www.adzuna.co.uk as part of a new project funded by Joseph Rowntree Foundation, showed that even now there are nearly half a million vacancies in the economy.  And while this has fallen hugely (by more than 40%) on a month ago, these figures are stabilising.

Doing all of this together, during a crisis like this, will be a huge effort.  We think it needs a ‘Cobra for Jobs’ bringing together government, employers and wider social partners. But one final lesson from previous recessions is that the hard work on the recovery needs to start now.