The end of retirement?

It would be easy to imagine that concern about encouraging more older workers to remain in employment is a relatively recent phenomenon. For example, the proposals this week from the Centre for Social Justice suggest raising the state pension age to 75 by 2028. In fact, well before the establishment of IES in 1968, the topic had been the subject of some serious analysis by policy makers, medics and employers. In 1951, for example, the National Advisory Committee on the Employment of Older Men and Women was established to look at issues such as flexible retirement ages. A decade later in the British Medical Journal, Dr A J Orenstein (a medic working for the Rand Mines Ltd in South Africa) wrote an article entitled Should Retirement at a Fixed Age Be Compulsory? In it, he made propositions which now seem a lot more mainstream than they were in 1961:

He cited some work conducted in conjunction with 11 GPs in Birmingham who had assessed the work fitness of almost 700 male patients over 70. Of those aged between 70-74, just under half were judged to be fit to carry on in their original occupations and a further 20 per cent fit to work, but not in their original jobs. Among those between 80 and 84 years old, these figures were 22.6 per cent and 7.5 per cent respectively. Whether these assessments were robust or not, it shows that, even at the dawn of the 1960s, thought was being given to extending working lives in a way that took account of the (mainly physical) capabilities of older workers. There is no record of the preferences of these men being recorded, but perhaps those are questions more likely to be considered important by contemporary researchers? By 1968 itself, analysis by the Institute for Fiscal Studies (IFS) shows that 80 per cent of men aged 60-64 were in paid work, but this had fallen to just 45 per cent by 1993 (the biggest fall was in the early 1980’s recession fuelled, in part, by generous early severance schemes being offered by employers keen to reduce their headcount).

So where have we got to in 2019? As we know, the increasing employment rates of older people have been a consistent trend across most OECD economies in the last decade. This rise has been driven by three underlying structural factors and more recent changes on pension policy. The most obvious is that life expectancy has increased and this in turn has increased the share of older people in the population (for example, post-retirement life expectancy for French women is 27.2 years!). It has also allowed people to work longer. Both these developments make the concept of normal working ages of 16 to 64 obsolete. In addition, improvements in educational levels and the rise in the share of better educated workers has worked its way through the workforce, and on average the better educated are much more likely to be in employment for longer than the poorly educated.

Successive governments have introduced changes in pension provision and employment law which have removed the ability of employers to enforce fixed retirement ages, pushed State pension retirement ages up and made it easier for people to continue to work, reducing the cliff-edge still faced by many older workers. There is also some evidence that many older workers want to stay on in jobs they enjoy, albeit not necessarily on a full-time basis.

This positive story also has a darker side, however. Some older workers struggle on in poorly paid jobs out of necessity rather than choice. And the labour market has been a harsh place for those older workers who become unemployed and do not have the skills or relevant experience, or live in areas of high unemployment and find it hard to get back into a job. Others who might have continued in work with more support despite the development of chronic physical and mental conditions have instead dropped out of the labour market. Another interesting feature of the older workers story is the growth in the number of men and women over 65 who are now in work. Figure 2 show that participation rates in the 65-69 age group have almost doubled since 2000. 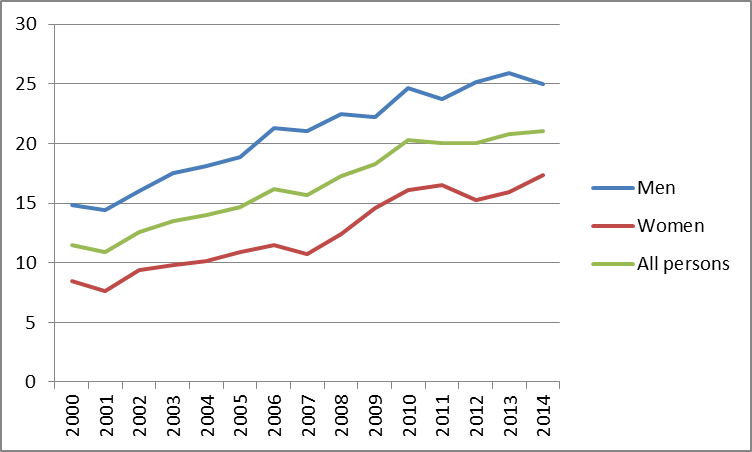 Source: DWP (2015) - Employment statistics for workers aged 50 and over, by 5-year age bands and gender

It looks likely that this trend will continue – partly as preferences and norms change. Data from a number of cohort studies in the UK suggests that up to 25 per cent of people who retire return to paid employment within 15 years – though mostly within 8 years (Glaser et al, 2017). The ‘Wellbeing, Health, Retirement and the Lifecourse’ (WHERL) project is an international collaboration looking, among other things, at retirement decisions among older workers. Among this ‘unretired’ group, the majority were healthy, relatively prosperous and exercising a positive choice to return to work. These data suggest that it would be wrong to regard retirement as a single, permanent and irreversible event any longer. Indeed, it appears to be more of a process which can vary substantially by individual and which can mean that the later career can be characterised by interruptions, reversal and significant changes in direction – most often discretionary.

So, while it may be premature to declare the ‘end of retirement’ just yet, it seems that the possibility that doctors and others were considering in the 1950s and 60s - that retirement might eventually become a less final and more flexible choice – has already become a reality for a growing proportion of older workers.