‘I have long since taken the view that politician and media hype on flexible labour markets has got in the way of finding benefit in flexible work arrangements. Indeed, I wrote a book to make the point. The brouhaha about zero-hours contracts struck me initially as another one of these examples of more heat than light in understanding employers' genuine need for labour flexibility. It is true that zero-hours contracts are more difficult to justify than, say, temporary work from a mutuality perspective but there are people who want that kind of unstructured work - the occasional means of earning (extra) income without the commitment to a formal set of hours. In many cases, the approach can be organised via a call-off register (like the nursing bank) to permit being asked to cover a workforce gap. The same sort of flexibility is achieved through joining an agency or indeed becoming self employed.

‘When the book was written in 2000, only 1% of the employed workforce worked under zero-hours contracts. If you believe the ONS, the proportion is exactly the same now, even if the absolute numbers have gone up (since the working population has risen at the same rate). Today's reported CIPD research suggests a four-fold increase, but the difficulty is that a different method has been used to collect the data, and if there has been an underestimate that could also have been true in 2001.

Proportion in employment on a zero-hour contract October to December, each year 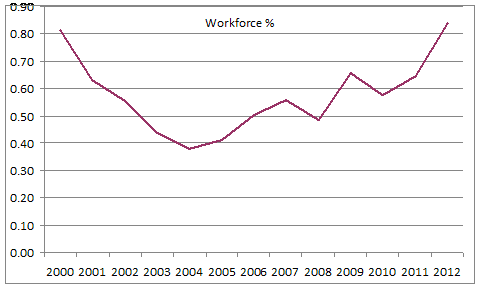 ‘The upward change can't entirely be explained by the recession. Interestingly, in previous recessions the rise in forms of temporary contracts grew as the economy recovered. Is the recent growth of zero-hours contracts evidence of the same pattern, as employers have extra work but are not yet confident about its persistence?

‘But it is really not the numbers that have got the media excited, it is the conviction that zero-hours contracts are exploitative: weak labour is forced to operate to unfair contracts that wholly benefit the employer. There is no mutuality here! It is hard to know the motivations of those that choose or are forced to work to these contracts and how acceptable the terms are to them. However, according to the press, some employers are using zero-hours contracts for the bulk of their employees.

‘If one goes back to the logic of temporal flexibility for an employer, it is to vary labour inputs with the variation in work demands. In that context, zero-hours contracts are suited to unpredictable staff needs, like short term absence or a sudden peak in orders. Good employers use other mechanisms (annual hours contracts, part time work, overtime, temporary staffing) to give flexibility over longer periods of time. Using zero-hours contracts for predictable or recurring work patterns appears to be a misuse of its purpose and rightly makes one suspicious of the motives for its adoption. Is it simply a means to avoid employment obligations that would flow from other, more standard types of contract?

‘Certainly, it doesn't seem an approach much informed by thoughts of employee engagement - that employees perform best when they are treated fairly and decently. Employees in this world are seen merely as a cost to be minimised rather than an asset to be maximised. In the long term, this is a self defeating strategy for the UK economy that will create a low cost, low value adding workforce that will not outperform the really low cost locations in the world. From that perspective, it is understandable if politicians worry about the spread of zero-hours contracts.’

Peter is Director of HR Research and Consultancy at IES. He leads IES work on reward and on the HR function, and contributes significantly to HR planning and labour market projects. He has published IES reports on reward, human resource planning, HR shared services and outsourcing. He has written numerous articles and books on both reward and the HR function. He gives consultancy support to organisations on issues concerning HR strategy, planning and resourcing, retention, HR organisation, trends in personnel management, performance management and reward.

To arrange a media interview with Peter, please email lorna.hardy@employment-studies.co.uk or call 01273 763 414.