Meaningful work. Part 2: How to destroy the meaning of work

Meaningfulness in work has been established as an important factor at work, influencing motivation, and improving performance and satisfaction. In this two-part blog, Katie Bailey, professor of management at the University of Sussex, outlines the findings of her recent research with Adrian Madden into what gives work meaning. In the first, she reveals where people find meaning in work and the role of organisations in this, and in the second she warns of the ways in which the meaning of work can be destroyed.

Although people have an innate and strong ‘will to meaning’, our recent research showed that organisations and line managers can unfortunately play a major role in destroying the potential for meaningful work.

We asked people to tell us stories about times when they found their work meaningless. Often, the stories they recounted focused on a clash of values. For example, the stone masons told us about times when they were asked to work ‘too quickly’ using modern tools and techniques to save time and money in their work on the ancient cathedral building. For them, this ran counter to their traditional craftsmanship values. One of the priests explained he found his work to be meaningless when parents were dishonest with him about their religious observance in order to secure a place for their children in faith-based schools. A nurse told us that she found her work meaningless when she was obliged to move patients off the ward before they were ready, in order to free up bed space. Asking people to work against rather than with their moral and ethical values and their sense of professionalism undermines the meaningfulness of work in a fundamental way.

People also told stories of rejection or unfairness. An academic spoke about his funding application being turned down for what he perceived to be unfair reasons, and a street sweeper talked about the time when he was encouraged to apply for promotion, but the job had in fact already been promised to another colleague. One of the retail assistants recalled the time she had put in extra hours to cover for a colleague’s sickness but this wasn’t acknowledged in her annual review. We found that when people feel they are being treated unfairly, or experience a procedural injustice, then they are far more likely to find their work pointless or futile, rather than meaningful.

Perhaps unsurprisingly, people also told stories about meaningless moments that revolved around the tedium and frustration of being given lengthy and seemingly valueless bureaucratic tasks to do, which took people away from what they saw as the heart of their jobs. Priests, actors, nurses, academics, and retail assistants all gave examples of such times. One academic talked of feeling as though he was ‘dropping spreadsheets into a black hole’ and many interviewees bemoaned the unnecessary amount of paperwork and record-keeping that was required of them. They found it hard to see the point of their work on days that just revolved around such tasks which they felt stole time away from their ‘real’ work.

It seems, though, that when managers take the time and trouble to streamline bureaucratic tasks, and to explain the value and importance to the organisation or to its clients of such tasks, then people can see the point of them and are therefore far more willing to undertake them. In this way, having a sense of how each element of a job contributes to a wider whole is a key element of meaningfulness. What is far less easily remedied are those times when people feel isolated from others, or rejected and unsupported in their work. Such times are associated with profound emotions of distress and frustration that leave a lasting imprint on the individual.

Our research showed that meaningfulness is not experienced as a steady state of mind; rather, meaningfulness arises episodically and often unexpectedly as events at work reveal the contribution that the individual makes to others or wider society.  No one we spoke to in our research said that their work was consistently meaningless, but rather that certain aspects of their work were meaningless and, when these arose too often or were too intense, then these led the individual to question the overall meaningfulness of their jobs. The task of the employer, then, is to work with their employees to tip the balance by creating an environment conducive to people finding their own meaning in the work they do. 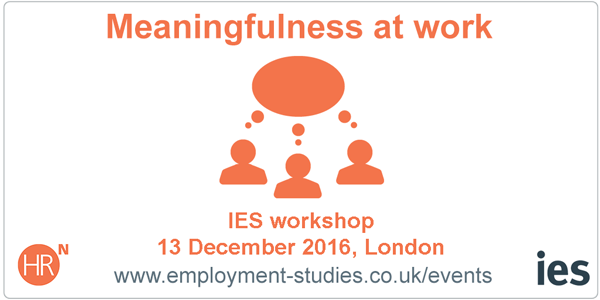