The challenges of an ageing workforce

Last year’s IES Fellows Reception saw Lord Willetts, executive chair of the Resolution Foundation, discuss both the threats and the opportunities confronting younger generations as a result of the ageing population. The statistics were startling: a third of people born today will live to 100; younger people were disproportionately affected by the financial crisis, while older generations came through relatively unscathed; welfare policy is shifting money to older people; and saving for a house deposit now takes 22 years, up from just three years in the mid-90s. 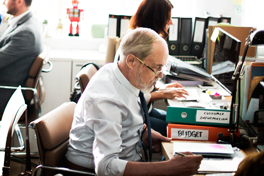 However, the challenges posed by the ageing population are not exclusively borne by the younger generation. Longer life expectancy necessitates longer working lives in order for individuals to be able to afford retirement, but healthy life expectancy is not rising at the same rate. Social care costs are rising while funding continues to fall. Informal care is on the rise for the over-50s – and with it, an ever increasing number of ‘sandwich carers’ caring for both their children and their parents.

This is all creating significant problems for the government. The old-age dependency ratio – the ratio of workers to retired people – is expected to rise from 27.6 per cent in 2015 to 35 per cent in 2030[1]. This will put pressure on the already-stretched Government budget, with lower tax receipts needing to pay for more pensions and the ‘triple lock’ commitment of a minimum 2.5 per cent rise in the state pension every year to 2020. Political pressure post-Brexit makes it difficult to continue to use immigration to stem the ratio’s rise.

Some industries and organisations are particularly affected by the ageing population. In December 2016, IES published research on how Brexit is likely to exacerbate nurse shortages[2]. This paper highlighted how the ageing population is increasing demand for services, with some Trusts expected to see the number of people aged 85 and over in their area increase by over 50 per cent. In addition, the NHS nursing workforce itself is getting older[3]. With 46 per cent of NHS staff now aged over 45, a significant number of nurses will be looking to retire in the short and medium term. Without a pipeline of workers from Europe to take up the shortfall, and coupled with an expected reduction in the number of nursing students following the abolition of their bursaries, some Trusts face a real challenge in maintaining their workforce.

However, this is not a challenge that is unique to nursing. The teaching[4], construction, and transport[5] industries are all reliant on older workers, albeit to a lesser extent than nursing. Construction and transport are also more likely to be subject to automation, which is likely to result in a shrinking workforce in the future.

A short- to medium-term fix for the industries potentially affected by the ageing workforce is to ensure that older workers retire later. This would have a number of benefits not just to those industries, but also to the Government and older workers themselves. First, a higher employment rate among older people will improve tax receipts, helping to finance state pensions. Second, work and health can have a reinforcing effect on each other.

The Department for Work and Pensions’ (DWP) Fuller Working Lives initiative is designed to improve the rates of over-50s in work. This has had some success, with 69.6 per cent of people aged 50-64 in employment in 2015, the highest rate for some years[6]. Nonetheless, this remains below the current employment rate of 74.5 per cent for those aged 16-64, and the Government will be looking to understand the reasons for this.

IES has recently worked with the Centre for Ageing Better (CfAB) on a rapid evidence assessment to understand what over-50s find fulfilling about work[7]. The report highlighted that the factors which make work fulfilling for older workers are very similar to those for younger workers. Nevertheless, there are some factors which are more important to older workers, including:

The report also notes that health has the biggest effect on an older worker’s decision to work.

Recent Government policy has run along similar lines, with the extension of the right to request flexible working in 2014 and the creation of a joint DWP and Department of Health Work and Health Unit last year. The Unit published a green paper late last year; IES has submitted its expert response to the consultation.

In the short term, the Government will be publishing its Carers Strategy, which will be monitored with interest: the previous strategy was published in 2008. In addition, the Work and Health Programme, which is replacing the Work Programme (evaluated by IES in 2015[8]), is due to be rolled out in autumn 2017. It is unclear whether the new programme will have elements specifically targeted at over-50s, as was the case with the Labour government’s predecessor programmes.

Clearly, there is much food for thought for all those involved, including the Government, employers, and individuals. Ageing is an entirely predictable phenomenon; we know that there were two birth peaks following World War II, and we know that life expectancy continues to rise. The challenge is acting on that information effectively.

[3] Marangozov R, Williams M, Buchan J (2016), The labour market for nurses in the UK and its relationship to the demand for, and supply of, international nurses in the NHS: Final report, Migration Advisory Committee

[7] Marvell R, Cox A (2017), Fulfilling work: What do older workers value about work and why?, Centre for Ageing Better

[8] Read more about IES’ evaluation of the Work Programme on our website: http://www.employment-studies.co.uk/project/work-programme-evaluation