I’ll come clean and admit it: I am a person of short stature. I’m accustomed to the remarks which will be very familiar to fellow short people, and are of course absolutely hilarious to the people uttering them, who are convinced that no-one else has ever been so witty:

'Is it ok if I use your shoulder as an arm-rest?'

'Oops, sorry, didn’t mean to trip over you – didn’t see you down there!'

There have been times when the good-natured jokes have become a bit edgier, such as an occasion in my first job when I allowed myself to become irritated by the teasing and left the room, I thought in a dignified way. From then on, my colleagues made frequent efforts to get me to repeat my 'Miss Piggy flounce' as it had apparently been interpreted. I don’t think my career has been seriously impeded by being only five feet tall, but how would I know? If I had the ability to go back in time and repeat my working life with six or seven additional inches, might I have done better?

It might be worth reflecting if our unconscious views about height are influencing our perceptions about interviewees, promotability and leadership potential in particular. In colloquial English, we ‘look up’ to someone we admire, and ‘look down’ on people who are thought to be of little consequence. We praise someone’s ‘towering intellect’ and describe people we admire as having ‘impressive stature’. A short woman who expresses a vehement opinion is said to be ‘shrill’ and ‘lacking in presence’, and might even be advised to lower the pitch of her voice. For short men, it’s even worse; every short man who expresses a forceful opinion, becomes indignant about anything, or speaks passionately, is labelled, often mockingly, as having a ‘Napoleon complex’. 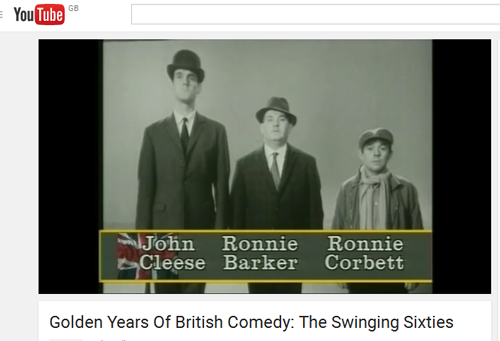 The famous ‘Class Sketch’ from The Frost Report, first shown on 7th April 1966,
used height as a proxy for class. Both John Cleese and Ronnie Barker
look down on the hapless Ronnie Corbett, who ‘knows his place’.

Does all this really matter? The evidence would seem to suggest that it does.

Overt discrimination against short people is fortunately very unusual, but when it does exist, it rarely provokes an outcry. In January 2015, the press rightly fumed about Russia’s decision to prevent transexuals and transgenders from driving motor vehicles – yet very few reporters also highlighted that the new law also applied to people below 150 centimetres (around five feet).

Almost equally rare is legislation prohibiting height discrimination, notable exceptions in the USA being the state of Michigan and the municipalities of Santa Cruz and San Francisco, both in California, and in Canada the province of Ontario.

Although height requirements are now unusual in job advertisements, due to a small number of successful legal challenges, the evidence (both academic research and anecdotal experiences) indicates that short people are indeed disadvantaged in the workplace.  Has the time come for height to feature in diversity and inclusion policies? Should shortness be recognised as a feature that attracts bias?

As I conclude this reflective piece, I can’t help feeling that it’s ironic that my spell-checker doesn’t recognise ‘heightism’[6] as being a legitimate word! I shall endeavour to add it to the dictionary.

[5] The Economist 25 October 2014, reporting on a study conducted by Huazong University of Science and Technology.

[6] The term was coined by sociologist Saul Feldman in 1971 a paper entitled ‘The presentation of shortness in everyday life – height and heightism in American society: Toward a sociology of stature’ presented at a meeting of the American Sociological Association.