The productivity puzzle: are we looking in the right place?

The woeful productivity performance of the UK economy continues.
In fact, the productivity statistics have been a regular and sobering corrective to any self-congratulatory impulses we might have over either low unemployment or the very belated and modest recovery in real wages.

Data from the Office of National Statistics (ONS) show consistently that - had the pre-2008 trend continued - productivity levels today would be around 20 per cent higher than before the financial crash. The most recent ONS data shows that productivity growth to June 2018 remains anaemic and unevenly distributed across sectors of industry, and international data from the OECD suggests that other countries are challenged on productivity to almost the same degree as the UK.

Traditional prescriptions to cure this malaise have not worked as well as mainstream economics predicts. Investing in technology or in workforce skills have been relatively blunt instruments. Indeed UK business investment remains at low levels, with a Q1 to Q2 reduction of 0.7 per cent in the latest 2018 data. Some argue that, in an era of ultra-low interest rates and Brexit uncertainty, businesses can still generate reasonable profits by relying on hiring relatively low wage and low productivity workers rather than higher wage and more productive workers. This reflects a form of cautious but rational short-termism which also indicates that many UK businesses attach more value to profitability (which they do measure) than productivity (which they mostly don’t).

So far, so depressing. But it may also be that, in too many companies, the quality of management is becoming an increasingly severe constraint to productivity growth. Concerns about the quality of management once we look outside the top corporates and multi-nationals has been a long-standing worry in the UK, especially in family owned firms which have lower productivity than firms which are professionally managed. The ‘Be the Business’ initiative is a notable effort among UK businesses and opinion leaders to address the UK’s productivity crisis.

In a 2017 speech, the Chief Economist of the Bank of England Andy Haldane highlighted this as an issue and suggested that substantial improvements could be gained by improving managerial quality:

'... there is a statistically significant link between the quality of firms’ management processes and practices and their productivity. And the effect is large. This suggests potentially high returns to policies which improve the quality of management within companies.'

One of the areas where the quality of management and labour productivity traditionally connect is in the field of sickness absence from work. Aside from genuine sickness, most research shows that absence levels can be affected by organisational culture, job content, line manager capability and job security. As productivity is usually expressed in terms of output per hour worked most employers are keen for employees to attend work and to be as productive as possible for each day they are being paid.

The data on trends in UK sickness absence make interesting reading in this context. The days lost to sickness absence per employee each year have almost halved since 1993 (from 7.2 days to 4.1 in 2017) meaning that, in theory at least, UK employers have seen a steady increase in the amount of productive capacity available to them. Of course increasing the ‘labour inputs’ side of the productivity equation without also increasing output for every additional hour worked will have the effect of reducing productivity.

It could also be argued that improvements in productivity over many decades have allowed the working week to reduce – average weekly hours in the UK fell from 62 in 1870 to 32 hours today (taking into account part-time working). The TUC also argues that employers also benefit from up to 2 billion hours of unpaid overtime each year – with a value of £31.2bn. The issue of working time continues to be debated with eminent economist Professor Robert Skidelsky reportedly looking at whether a four-day week in the UK might be a realistic policy option, and there are lots of reasons why seeking innovation in working time and work-life balance may be important.

However, if we want to move beyond the ‘quantity of labour inputs’ arguments to scrutinise the intensity or effectiveness of these inputs we have to look more critically at the almost silent rise of ‘presenteeism’ as a factor of labour productivity. There are several definitions of ‘presenteeism’, but this one will serve for the purposes of this blog:

‘Lost productivity that occurs when employees come to work but perform below par due to any kind of illness.’

‘Presenteeism’ is now recognised as a significant phenomenon which has business and health impacts. While it remains challenging to measure accurately, the CIPD has recently estimated that presenteeism in the UK has tripled since 2010. UK research conducted in a financial services company found that the three most important factors leading to employees attending work when ill were:

As if to emphasise this last point, a senior manager in a large organisation told me at a recent wellbeing event that increasing presenteeism shows that his ‘crackdown’ on sickness absence is working.

The international data suggests that the UK is not alone in witnessing an increase in presenteeism in parallel with low levels of productivity growth. Data from two waves (2010 to 2015) of the European Working Conditions Survey (see graph) shows that self-reported presenteeism has grown in the UK by 15 per cent to almost 60 per cent of the workforce, and in some EU member states it has increased by between 30-53 per cent (in Greece, for example). 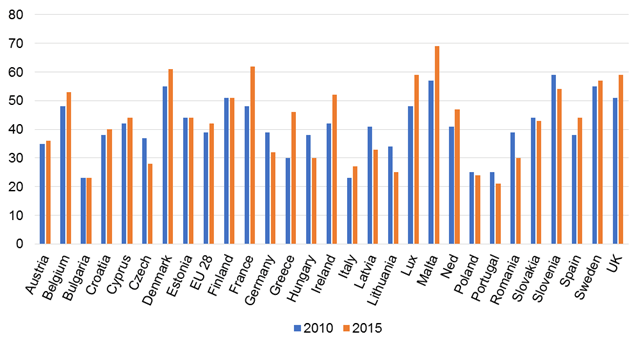 We know that in countries with high levels of unemployment and persistent fears of job insecurity, recorded sickness absence can fall and ‘presenteeism’ can rise. If more people who are living with long-term or chronic health conditions are attending work when their health might justify them taking time off work to get treatment or to recover, then this is likely to be a hidden ‘drag’ on productivity even if the data superficially suggests that ‘labour inputs’ have increased.

A big concern is that employers may be at risk of underestimating employee ill health and missing warning signs by focusing on reducing absence alone. Sickness presence may be detrimental to employee health in the long-run because it can ‘mask’ serious illness. In the famous Whitehall II study of the long-term health of UK Civil Servants, Professor Sir Michael Marmot and his colleagues found that:

‘… an elevated risk of serious coronary heart disease was found for those men with bad self-rated health who did not take any sick days at all compared with those unhealthy men who had a moderate number of sick days (ie, 1–14 days).'

We know that, in some organisations such as the Civil Service, up to 53 per cent of staff (especially senior people) do not take any absence at all. Up until now this has been felt to be a virtue or an indicator of commitment. Perhaps we should more fittingly regard this as both a hidden health risk and a serious part of the productivity puzzle we’ve been ignoring up until now.

Over the last 50 years productivity has been a big focus for IES because of our interests in human capital, skills, technology at work and on health and wellbeing at work. As productivity growth lies at the heart of our future prosperity, wage growth, living standards and ‘good work’, we will continue to engage with government, business, unions and other key players to make sure that the macroeconomic perspective on productivity is supplemented by the real-world and workplace perspective where so much more needs to be achieved.