IES is supporting Renaisi with its evaluation of the Refugees Into Sustainable Employment (RISE) programme. Here Alice Thornton (Renaisi), Helena Takala and Rosie Gloster (IES) discuss how nationally available data has been used to improve the targeting of employment support for refugee communities.

There is much to improve when it comes to boosting the employment prospects of refugees in London and in the UK more generally. Refugees have a much lower employment rate than the general population: in 2010, it was estimated that only 49 per cent of refugees were in employment 21 months after their asylum decision – by comparison the UK average employment rate in the same year was 72 per cent. Refugees, while legally entitled to work, face multiple and complex barriers to employment, such as lack of language skills and work experience in the host country, unrecognised qualifications, insecure housing, and negative stereotyping by employers.

RISE (Refugees Into Sustainable Employment) is working to change this with free support to help refugees find work. RISE is supported by the Building Better Opportunities (BBO) programme, which is funded by the Big Lottery Fund and European Social Fund (ESF), and operates across 10 boroughs in north and east London. Services offered as part of RISE include assistance applying for jobs, support with improving English language skills, help with benefits and housing, and in-work support. Since April 2017, RISE has supported 625 refugees, of whom over 130 have already been supported into employment.

One of the big challenges in designing a large-scale employment programme for refugees is that there is very little information available on where refugees live, and what the refugee employment rate is in different areas from national datasets. Research for RISE by the Institute for Employment Studies has helped to address this problem by developing two proxies that can be used as an approximate guide to the location of refugees in London.

The first is based on Section 95 data[1] published by the Home Office. This shows the location of asylum seekers receiving financial support whilst waiting for their asylum claim to be processed. At best, this data offers an imperfect snapshot of trends in areas where asylum seekers are based – not all asylum seekers receive this support, not all asylum applications are granted, and not all refugees will stay in the area they were located whilst their application was being processed. However, this data is the best available to estimate the 'hot spots' and 'cold spots' of new refugee arrivals.

The second proxy is based on data from the most recent Census, in 2011. The Census does not ask whether someone is a refugee, but does include a question on country of birth. We know from national statistics that certain countries produce high levels of asylum applications, including Nigeria, India, Pakistan, Somalia, and Uganda, so this Census data can be used to identify boroughs with high numbers of people from particular communities that are likely to contain higher than average numbers of refugees. This data is now relatively old, and can't tell us for certain how many refugees are in a particular area, but it does give an approximate indication of which boroughs and which communities a programme like RISE needs to engage.

What does the data tell us?

Based on this analysis we can estimate that of the boroughs in which RISE is delivered, there is likely to be a particularly high number of refugee communities in Barking and Dagenham, and Redbridge (see Figure 1). Recently, there has been an increase in new arrivals in the outer London boroughs; since 2015, both of these boroughs have had a sharp increase in the numbers of Section 95 recipients, whereas most other RISE boroughs have had a relatively consistent number of people supported under Section 95 for each of the last ten years. 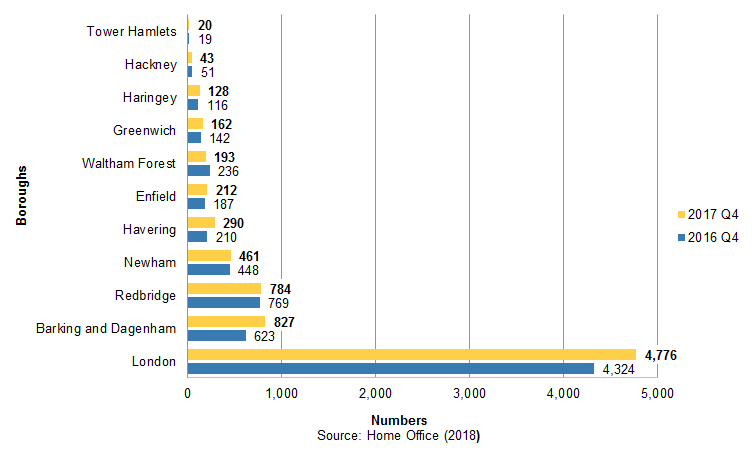 Taking Barking and Dagenham as an example, and using country of birth data from the Census 2011 (Figure 2), we can see there are communities from Nigeria (8,695), India (4,364), Pakistan (4,337) and Bangladesh (3,560). Many of these communities host a number of asylum seeking applicants (highlighted as yellow bars in Figure 2) so we can assume that there are potential refugees within these communities, even if we cannot reliably estimate the exact number. 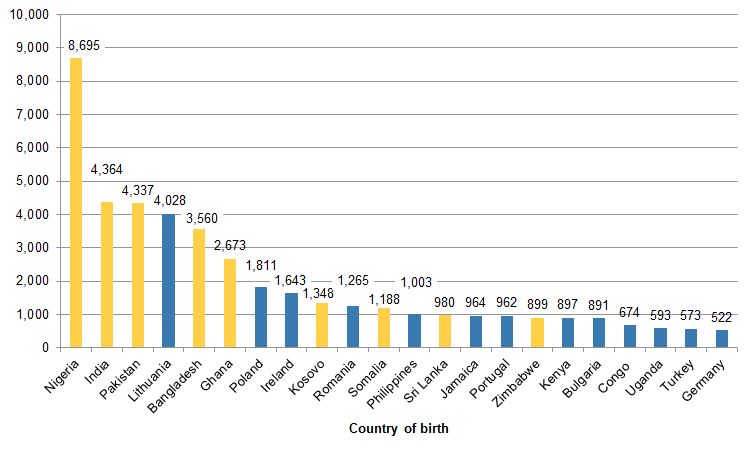 How far does the data reflect actual referrals onto the programme?

In the first 18 months of the programme, RISE has attracted a high number refugees based in Waltham Forest, Haringey and Greenwich (all of which Figure 1 suggests have a moderate, but not very high number of refugees), and a low number of refugees from Barking and Dagenham, Tower Hamlets and Enfield (of which only the latter is predicted to have a low number in Figure 1). There could be several reasons for this discrepancy in patterns of engagement: it is possible that RISE has not reached potential groups of refugees in particular boroughs, although it is also possible that the data proxies are inaccurate. What is clear is that patterns of referrals strongly reflect the locations of key partners to the RISE programme.

Because RISE works across such a large area, and because refugees face challenges in areas of their lives other than employment, working in partnership has been crucial to success. For example, refugees experience high levels of homelessness which requires sequenced and co-ordinated support, and because of this RISE has built strong links with specialist hostels and supported housing providers such as the YMCA, Caritas Anchor House and Just Homes. The 'hot-spots' of refugees supported by RISE reflect the location of these partners and others. As ever, relationships are key.

Whilst using national data as a proxy for estimating refugee numbers is undoubtedly valuable, it only tells part of the story, and some sources are quite dated. It is therefore not only difficult to estimate the size and nature of the refugee population, but also emerging trends and changes, such as the effects of the Syrian crisis, which will take time to show up in the data. Better quality and more timely data would be helpful to enable the most effective targeting of target programmes like RISE to where there is need. In the meantime, collaboration with partners and grassroots organisations is an important way of understanding at a local level how communities are changing.

Where next: expanding partnerships

Building on the success of the first 18 months of the programme, RISE would like to continue building relationships with organisations supporting refugees across the 10 boroughs in which the programme operates. If you are interested in partnering with RISE, please contact Emma Smail: e.smail@renaisi.com

With thanks to Marie Nichols, Emma Smail and all of the RISE team.

This article was originally posted on the Renaisi website:
http://www.renaisi.com/using-data-improve-employment-support-refugee-communities/

[1] Financial support offered to asylum seekers for subsistence and/or accommodation (defined in section 95 of the Immigration and Asylum Act 1999).